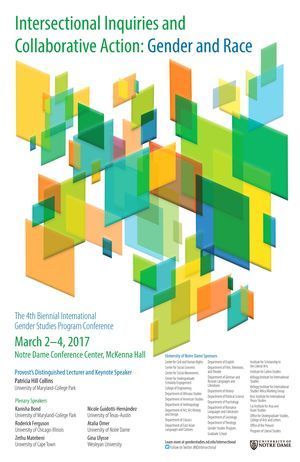 Questions of race and gender continue to undergird broad sections of inquiry in the academy and beyond. The ongoing legacies and current manifestations of racism and sexism continue to demand intellectual analysis, institutional recognition, and collective intervention. Reaching a critical crescendo during the political upheavals of the 1960s’ civil rights/anti-colonial era and the responding cultural turn in the humanities, Black feminists have discussed the ways in which both race and gender are co-constitutive and rely on intersecting paradigms of power and constructions of difference. Indeed, the concept of “intersectionality,” coined by Kimberlé Williams Crenshaw, has become a key mode of framing how identities and sites of contestation around identity are multiple and complex. Furthermore, critics and activists from a myriad of socio-political milieus have underscored the importance of intersectional approaches in struggles for social justice and in the making of inclusive public spaces. From feminist scholarship to human rights policy to commentary via Twitter memes, intersectionality as a theoretical concept, method of analysis, and mode of collaborative action circulates in both grassroots and intellectual discourse.

The Intersectional Inquiries conference will offer a platform for scholars from various fields to interrogate the intersections of race and gender--as manifested materially and discursively--from a broad range of historical, global, and contemporary contexts. We call on scholars, activists, and students to attend rigorously to the ways that race structures gender, sexualities, class, and dis/ability and the dominating matrices of biopolitical violence and imperialism, as well as to trace how racialized subjectivities and non-normative embodiments challenge and radically fracture hierarchy. With this conference, our hope is to inspire impactful intellectual dialogue and assist in building ties that might lead to scholarly- and social justice-focused collaborations.