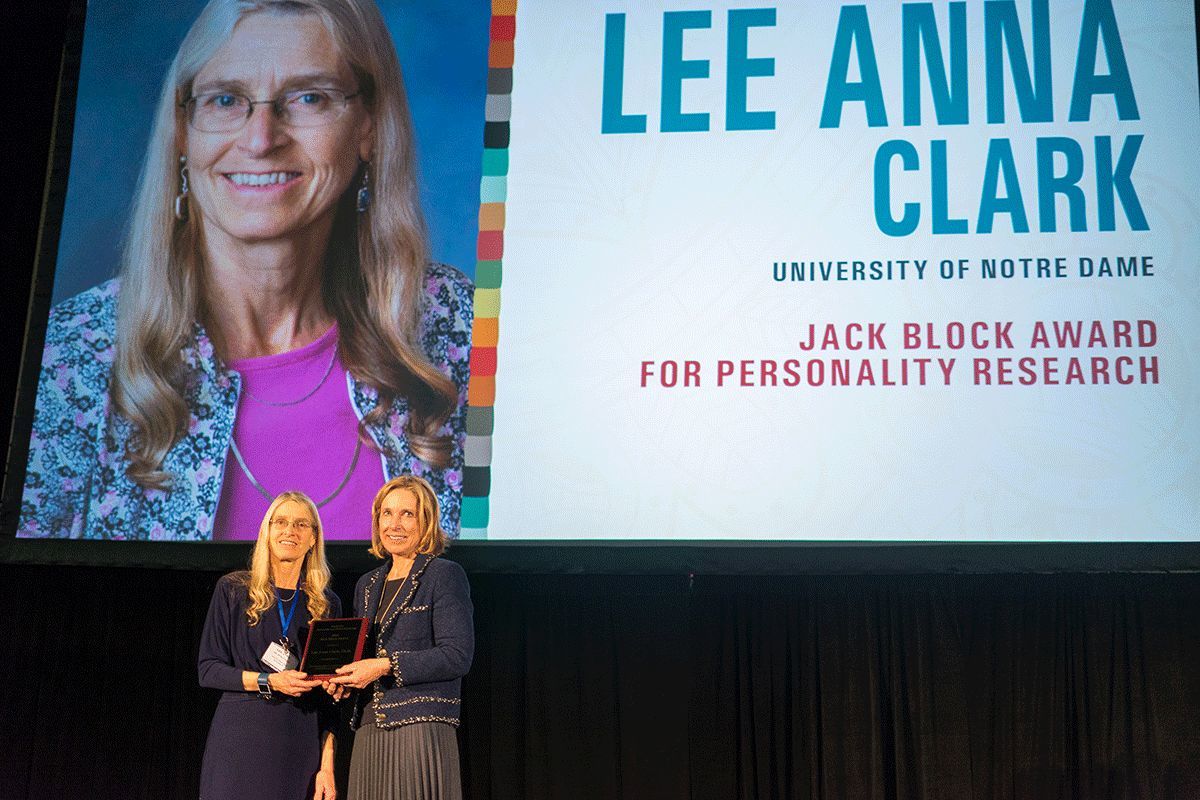 Lee Anna Clark, chair of Notre Dame’s Department of Psychology, will receive two lifetime achievement awards this year, reflecting the way in which her work has bridged two major areas of psychology.

Block was an icon in the field of personality psychology. Zubin was an authority on psychopathology.

“To me, it’s very special to get both of these awards in close proximity,” said Clark, the William J. and Dorothy K. O’Neill Professor of Psychology.

Known for her research on the assessment of personality disorder, including the development of the Schedule for Nonadaptive and Adaptive Personality (SNAP), a psychological test that measures personality traits across the normal-abnormal spectrum, Clark is one of the Institute for Scientific Information’s “most highly cited” psychologists.

After majoring in psycholinguistics and earning a master’s degree in Asian studies at Cornell University, she earned her Ph.D. in clinical psychology at the University of Minnesota.

As she was beginning her graduate school research, The Diagnostic and Statistical Manual, 3rd edition (DSM) was published. The American Psychiatric Association publication is considered the “bible” in the field of psychiatry, and although that edition acknowledged the role of personality, Clark believed it fell short on how it addressed personality disorders.

“What I set out to do was to give the diagnosis of personality disorders more of a firm grounding in personality more generally,” she said. “To establish anything in science, you have to be able to measure it, so I began with developing a measure.”

Using what she learned at the University of Minnesota about creating measures, she spent the next decade developing one based on normal personality research, then extending that into personality pathology. Her goal was to move the DSM model from a categorical way of thinking about personality disorder to a more integrative, trait-based view of personality and its various problematic expressions.

Until recently, subsequent DSM versions changed very little in how they addressed personality disorder. Clark was part of the working group considering their revision prior to the publication of the DSM’s 5th edition in 2013. The most recent DSM includes revisions based partly on work Clark began in 1980.

“It’s really gratifying that it’s what I spent my career doing,” she said. “And I’m still enjoying the work—I don’t feel finished yet.”

“It’s really gratifying that it’s what I spent my career doing. And I’m still enjoying the work—I don’t feel finished yet.”

Clark also showed the close relations between the fields of personality psychology and psychopathology in research done with her husband — David Watson, the Andrew J. McKenna Family Professor of Psychology at Notre Dame, who won the Jack Block Award last year for his research on personality and mood.

A paper they wrote jointly on the Positive And Negative Affect Schedule (PANAS), a simple but effective test to measure mood, has been cited nearly 24,000 times.

“Essentially, David and I have spent our careers discovering and investigating the many different ways in which personality and psychopathology are interconnected,” she said. “I do think our work has made a difference. It’s very gratifying to know that other people recognize that.”

Funded by a $2.5 million grant from the National Institute of Mental Health to study these questions, they administered a six-hour battery of tests to 300 patients at Oaklawn Psychiatric Center, a nonprofit mental health agency in northern Indiana. Another 300 people dealing with personality problems in the South Bend community also took the tests.

Clark and her team also conducted interviews with people who knew their study participants. The final data were collected last summer, and the researchers are now analyzing and writing about the results.

Preliminarily, she believes that particular aspects of functioning are intertwined with psychopathology. The data likely will not give answers about what causes personality disorders, but it may show that people with particular personality characteristics are more prone to developing problems in interpersonal and other kinds of functioning.

It could also provide details that substantiate and extend what she and Watson have shown about personality and psychopathology being inseparable.

“David and I have spent our careers discovering and investigating the many different ways in which personality and psychopathology are interconnected. I do think our work has made a difference. It’s very gratifying to know that other people recognize that.”

Originally published by Marshall V. King at al.nd.edu on February 21, 2017.