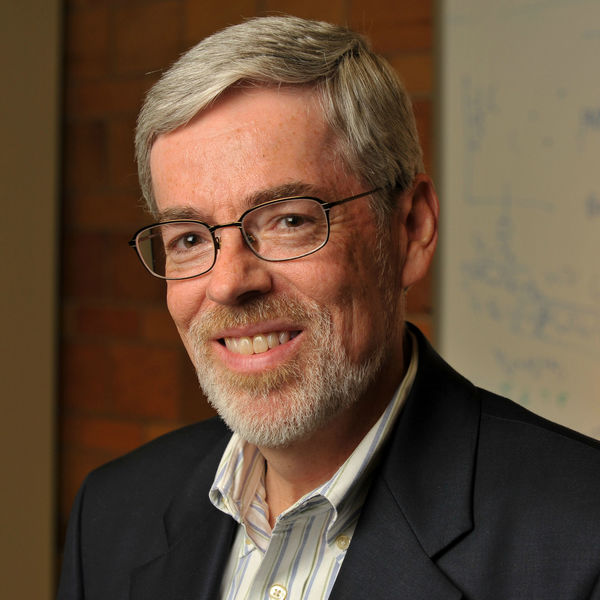 Scott E. Maxwell, Matthew A. Fitzsimons Professor of Psychology in Notre Dame’s Department of Psychology, is retiring in 2017. A professor since 1988, he came to Notre Dame as an associate professor in 1982 from the University of Houston. He twice served as chair of the department, has co-authored three books, and has authored or co-authored more than 150 journal articles or book chapters.

His scholarship on research methodology and applied behavioral statistics has earned him many awards, including the American Psychological Association’s Samuel J. Messick Award for Distinguished Scientific Contributions in 2010.

The following are reflections and tributes to him from academic colleagues from his department and around the country.

I’ve known Scott for more than 30 years, though we’ve only met in person a few times. Our encounters have always been warm occasions, as if we were two old friends getting together after a while.

Truthfully, though, I know him mainly through his research and scholarly work. But, he writes so well and his approach to solving problems and eliminating real and potential confusion is so thorough that when reading his articles, he may as well have been speaking to me from one end of a log, with me on the other end.

Scott has conducted research on a broad set of theoretical and methodological topics. What strikes me is how often his results surprised me, most pleasantly, and I presume surprised many others as well. I remember first feeling this way after reading his 1984 Psychological Bulletin article on blocking versus ANCOVA. I had no idea that the commonly held view was incorrect, but Scott was insightful enough to think that this might be the case that he actually carried out the study in convincing fashion. Who knew that splitting variables at their medians could negatively affect Type I error rate? Scott showed this is so, and why.

And Scott’s examination of the prevalence of underpowered studies in psychological science answered many questions into this matter that were raised by Cohen and Gigerenzer. Fittingly, he situated the problem, as he had done many other times, in the context of philosophy of science and the problems facing a cumulating science. I took particular pleasure in seeing this.

I wish I had conducted the studies that he undertook, and I wish I had written the articles that he published. But I am glad that he did, because I took great satisfaction in reading them, and I became a better researcher and teacher in the process.

When Scott Maxwell arrived to begin graduate school in the quantitative psychology program at the University of North Carolina at Chapel Hill in the early 1970s, he was, according to one of his faculty mentors (Mark Appelbaum), a very quiet student who did not stand out.

But, beginning in graduate school and continuing over a remarkable 40-year academic career, Scott Maxwell has produced a distinguished body of work that has spoken loudly. He has stood out in every way, becoming one of the most accomplished and beloved psychologists of his generation.

Scott’s deserved recognition stems from three primary sources. First, his quantitative work has addressed important quantitative problems. Much of his early work focused on issues in analysis of variance and covariance, which then—and still today—constitute everyday data analysis for many psychological researchers.

He answered important questions about matching versus blocking, the effects of covariates, and appropriate methods for repeated measures designs. More recently, his work has delved into newer topics that did not exist or were little known during his graduate school years, including statistical power analysis, mediation analysis, and missing data.

The hallmark of all of this work has been bringing insightful and truly rigorous statistical analysis to solve real problems faced by psychological researchers, presented with remarkable clarity so they can be read by the entire community of research psychologists.

These features have led to his work having enormous impact. Some scholars of scientific contributions use 100 citations as a marker for an important article and 1,000 citations for a citation classic. According to Google Scholar, Scott has 35 publications with more than 100 citations, two of which—his encyclopedic reference book Designing Experiments and Analyzing Data and his article on Testing mediational models with longitudinal data—meet the criterion of being classics.

Second, he has published numerous excellent application articles with his faculty colleagues, first at the University of Houston and now at Notre Dame. His vita includes numerous examples of excellent substantive work with past and present colleagues that was made even better by Scott’s contributions. I suspect that that no one at Notre Dame has been more collaborative with his colleagues than Scott Maxwell.

Finally, Scott has been widely recognized as a remarkably fair and hard-working person who has made wonderful contributions in service to the field. He has served two terms as chair of his department, as associate editor of three different journals and senior editor of Psychological Methods, and as a member of two major National Institutes of Health study sections. Much of this work is distinguished by Scott’s ability to understand the perspectives of others, to bring his wide-ranging knowledge to the problem, and his clear and sensitive expression of not only his decision but also the reasoning underlying his decision.

Scott Maxwell has been a distinguished teacher, researcher, and editor. His accomplishments have been recognized with such honors as the Messick Award for Distinguished Scientific Contributions from Division 5 (Evaluation, Methods, and Statistics) of the American Psychological Association, teaching awards from both the University of Houston and Notre Dame, and his election as president of the Society for Multivariate Experimental Psychology.

Yet, despite all of his accomplishments, Scott has retained the quiet and soft-spoken manner with which he entered graduate school—he is gracious to all those he encounters throughout his professional life, the model of a gentleman and a scholar.

Scott is one of the most knowledgeable people I've ever met. He is like a living dictionary of quantitative methods. There is literally nothing about quantitative methods that he is not aware of. In the meantime, he is so humble and down-to-earth. He never brags about his achievements or his knowledge. He is a living example of "still waters run deep."

On the other hand, when you need him, Scott never begrudges his advice or help. Being a world-famous scholar, he is very busy. But whenever I need advice, he is always there, for any question I have, small or big. He offers advice also in such a considerate and non-intrusive way that it would never make you feel uncomfortable.

To junior faculty like me, he is like a father figure. He mentors us, protects us, and campaigns for resources for us to succeed. To help junior faculty attract the best talents in the country, he uses his discretionary fund to support the visit of prospective students—even when he himself is not recruiting a student. He really is selfless.

I'd like to share one key moment. In December 2007, I interviewed at Notre Dame for an assistant professor position. After my interview, Scott drove me from the Morris Inn on campus to the train station. I was surprised that he did not leave right after dropping me off. He actually stayed there till the train arrived.

While waiting, we talked and I told him about my experience when I first came to the U.S. to pursue graduate education. English was my second language, so I was a bit self-conscious about my accent. But then, Scott said, "Who doesn't have an accent?" and, in his next sentence, launched into a dramatic Southern accent (he’s from the South, after all). It just made me laugh and feel a lot better. That morning in the train station really has stuck in my mind till this day.

As a scholar, Scott is tremendously successful. He has great vision, and built the quantitative psychology program at Notre Dame from a one-man shop to one of the very best in the country. As a senior colleague, he is a great mentor. Outside of work, he is the nicest person you could be around. He has been a huge influence on me, and I don't think I would be where I am and who I am today without him.